Morning Year 6. I hope you had a lovely weekend and I look forward to seeing you on Zoom at 9:05am.

Here is this week’s retrieval quiz for you to complete.

In the following scene, Nick Bottom and some other characters are about to perform a play at Theseus’s and Hippolyta’s wedding. They have been practising the play in the forest and that is how they met Puck and Titania.

The script that you will see if the play that they are performing.

Have a look at the vocabulary first:

Interlude – a pause between the acts of a play.

Perchance – by some chance; perhaps.

So please your grace, the Prologue is addressed.

Let him approach. Flourish of trumpets

Enter QUINCE for the Prologue

If we offend, it is with our good will.

That you should think, we come not to offend,

But with good will. To show our simple skill,

That is the true beginning of our end.

Consider then, we come but in despite.

We do not come as minding to content you,

Our true intent is. All for your delight

We are not here. That you should here repent you,

The actors are at hand and by their show,

You shall know all that you are like to know.

In this same interlude it doth befall

That I, one Snout by name, present a wall.

And such a wall, as I would have you think,

That had in it a crannied hole or chink,

Through which the lovers, Pyramus and Thisbe,

This loam, this rough-cast and this stone doth show

That I am that same wall; the truth is so.

And this the cranny is, right and sinister,

Through which the fearful lovers are to whisper.

And thou, O wall, thou sweet and lovely wall

That stands between her father’s ground and mine!

Show me thy chink, to blink through with mine eyne!

Wall holds up his fingers

Thanks, courteous wall. Jove shield thee well for this.

But what see I? No Thisbe do I see.

O wicked wall, through whom I see no bliss!

Cursed be thy stones for thus deceiving me!

For parting my fair Pyramus and me.

My cherry lips have often kissed thy stones,

Thy stones with lime and hair knit up in thee.

I see a voice; now will I to the chink,

To spy an I can hear my Thisbe’s face. Thisbe?

My love thou art, my love I think.

O kiss me through the hole of this vile wall!

I kiss the wall’s hole, not your lips at all.

Wilt thou at Ninny’s tomb meet me straightway?

Thus have I, Wall, my part dischargèd so;

And, being done, thus Wall away doth go.

You, ladies, you, whose gentle hearts do fear

The smallest monstrous mouse that creeps on floor,

May now perchance both quake and tremble here,

Then know that I, one Snug the joiner, am

A lion-fell, nor else no lion’s dam,

For if I should as lion come in strife

Into this place, ‘twere pity on my life.

Myself the man i’ th’moon doth seem to be.

All that I have to say, is, to tell you that the lantern is the moon;

I, the man in the moon; this thorn-bush, my thorn-bush; and this dog, my dog.

This is old Ninny’s tomb. Where is my love?

Sweet Moon, I thank thee for thy sunny beams,

I thank thee, Moon, for shining now so bright,

What dreadful dole is here?

Eyes, do you see?

How can it be?

Now am I dead,Now am I fled,My soul is in the sky.

What, dead, my dove?

Are gone, are gone!Tongue, not a word.

Moonshine and Lion are left to bury the dead.

Ay, and Wall too.

No I assure you; the wall is down that parted their fathers.

Will it please you to see the epilogue, or to hear a Bergomask dance between two of our company?

No epilogue, I pray you; for your play needs no excuse.

Never excuse: for when the players are all dead, there need none to be blamed. Sweet friends, to bed.

Watch the clip below (the whole way through) to see the play in action.

Based on what you have read and seen:

What impression do you get of the play?

What do you think is happening?

Do you think the play is sad or happy? Why?

We are going to spend today’s lesson reminding ourselves how to use colons, semi-colons and dashes in our writing.

Have a look at the information, watch the videos and complete the tasks at the link below:

Now write a paragraph on a topic of your choice which includes semi-colons, colons and dashes.

This week, we will be completing some Rapid Reasoning questions again. 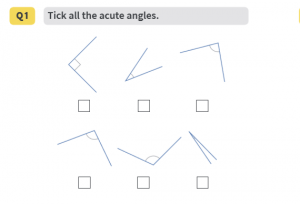 This week, we are going to be learning about algebra.

What do you know about algebra?

algebra – the part on maths in which letters and symbols are used to represent numbers.

Algebra is basically where we swap a number for a picture or a letter. Our job is to work out the missing letter.

Work through this PowerPoint to learn more.

Algebra can also appear as puzzles to solve. For example: 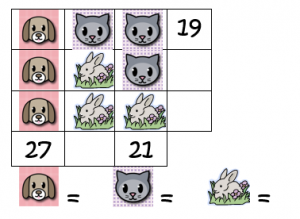 In this puzzle, our job is to use the information that we have to find out the value of the dog, the cat and the bunny.

Can you think of a strategy that we can use?

If we look at the first row, we can see that it includes 3 dogs: 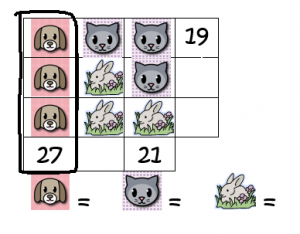 In algebra, one rule we must follow is that within the same calculation, the same symbol, picture or number must represent the same number.

In our grid above every dog will be worth the same value. We can use this to help us.

To help me out, I am going to write this into the grid. 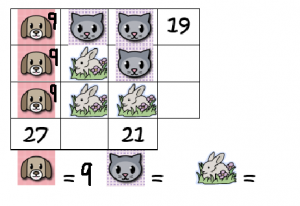 Now I can use this information to find out other pictures. I will start with the cat.

If I look at this row: 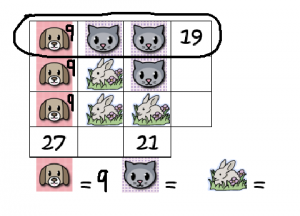 I know that the dog is 9 so I first need to find out what is left.

There are 2 cats so I need to divide the 9 so that they have an equal amount.

I’m going to add this information to the grid: 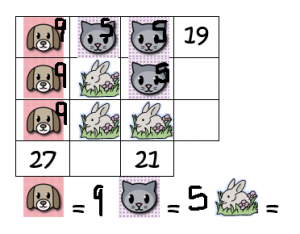 Now I just need to find out the rabbit and fill in the missing amounts.

I can use all of the information to find out the missing answers. Lets start with the rabbits by looking at this row: 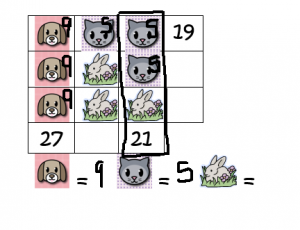 I know this row equals 21. I also know that the cats are worth 5 and there are 2 of them. That means the cats equal 10 altogether.

This means that the rabbits are worth 11. 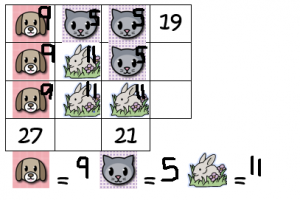 Finally, I can use all of this information to find out the missing answers. 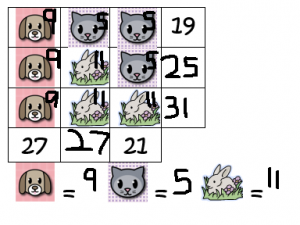 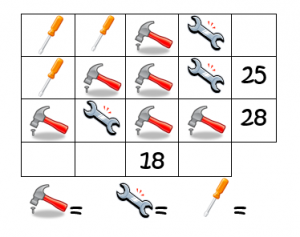 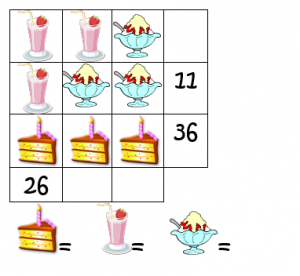 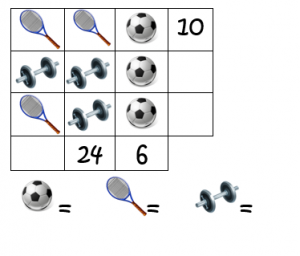 Now try these trickier ones where you will need to use trial and error to work out the missing numbers. 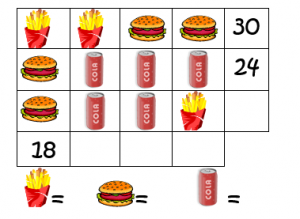 On this one, there isn’t a row that I can tell straight away however I can use what I do know to make some estimations.

So what could they be?

I know need to see if this works for the rest of the grid. If it does great, if it doesn’t, I need to change it.

Can you complete this grid?

Now try this one: 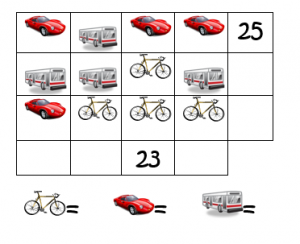 Have a bit of time reading something that you enjoy.

What became of this early dynasty?

Firstly, think back to everything that we have learnt so far and see if you can answer these questions:

What were the second dynasty of kings called?

What was the name of the first Oba king?

Name 1 way in which the Obas made themselves more powerful.

Now have a read through the vocabulary:

Foundations – An idea or structure that helps something to start, develop or grow.

Slave Trade – The buying or selling of human beings as slaves.

Fortress – A place less likely to be attacked from outside.

Expedition – A journey taken by a group of people with a particular purpose.

The period from 900-1300 AD saw the Edo people lay the foundations for what was to become the Golden Age of the Benin Empire. Between 1300 and 1700, the Benin Empire was at its height.

The Obas had overall power within the region. Oba Ewuare, who ruled from 1440-1473, is credited with turning Benin City into a military fortress by building a series of moats and walls around the outside of it. He also launched several military campaigns and began the expansion of the kingdom. Many other lands now came under the authority of the Benin Empire. As a result, the Empire stretched into what is now south-west Nigeria and present-day Ghana.

The region developed an advanced artistic culture at this time, especially with its famous artefacts of bronze, iron and ivory. These included bronze wall plaques and life-sized bronze heads of the Obas of Benin. Much of the artwork depicted Obas in various costumes. When Europeans visited Benin, many of them did not think that Africans could be capable of such sophisticated work.

The first European travellers to reach Benin were Portuguese explorers in about 1485. A strong trading relationship developed with the Portuguese, with tropical products and slaves exchanged for European goods and guns. The first English expedition in 1553 saw visitors bringing back tales of “The Great Benin, a fabulous city of noble buildings ruled by a powerful king.” A significant trading relationship soon grew between England and Benin based on the export of ivory, palm oil, textiles, slaves and pepper.

As time went on, the British Empire became interested in taking over places like Benin. In the 1880’s, Benin resisted an attempt by the British to gain control of it, which would have meant Britain getting control of what it could do both inside Benin as well as abroad. This included eight British representatives being killed in Benin. This really upset the British, and in 1897 there was an expedition in which a British force conquered the city. It was looted first and then set on fire. Homes, religious buildings and palaces were deliberately burned. Benin’s artwork was either destroyed or taken away by the British

Write a summary of what you have learnt today and answer the following questions:

What became on this early dynasty?

What impact did these changes have?

Spend some time playing one of the spelling games at:

Let’s get started on this week’s competition. Who will be the winner?

Enjoy the next chapter of The Explorer

Here is your link to our hub page.