Work your way through this spelling PowerPoint

I hugged Gloria, who gave me a bag of toffees for the journey. I thanked her, then put my arms around Mum.

“Just a minute, let me check you both,” she said, pulling away. Taking out her hankie, she licked it, then wiped Cliff’s cheeks, which he hated. Then she smoothed my fringe, even though it was already clipped aside. “That’s better. You’re tidy at least.”

I didn’t want to look at her. But she took hold of my chin and gazed deep into my face. It was like she was trying to remember me, even though I was still there.

“Look after your brother, there’s a good girl,” Mum said again, sounding like she had a cold coming. “Write to me, won’t you?”

“Of course,” Mum replied hastily. “But try to put it from your mind, darling.”

Gloria, I noticed, was biting her lip; it left lipstick smears on her teeth. Like they’d done at home in our kitchen, her and Mum shared one of those loaded grown-up looks. What it was all about, I didn’t know. Nor was there time to sk. Our train was being called again, and Cliff was hanging impatiently off my arm.

“Go on then,” Mum said, giving me a gentle push. “Stick together. You’ll be all right.”

I took a big breath, like I was standing on the edge of a wall trying to find the courage to jump.

“Come on,” I said to Cliff, taking his hand properly.

As soon as we started moving, the crowds that surrounded us buffeted us towards the train. When I looked over my shoulder, Mum and Gloria had gone.

Most of the train doors were closed by now, though head and arms still hung out of the windows. The guards, strolling up and down the platform, were telling everyone to take their seats.

Coach D was divided into three big compartments. Each one was full, smelling of heaters on too high and damp, dusty clothes.

I gave him a toffee and told him not to worry, though I didn’t honestly think we’d get a seat at all.

Making our way down the train, we stepped over sprawled legs and enormous pairs of feet. They were older kids than us, in the uniforms of at least two or three different schools, who looked bored already and the journey hadn’t even started. After searching the entire length of the carriage, we’d still not found a seat. So, putting our cases down flat, I told Cliff to perch on top of them. I’d be all right leaning against the wall – at least that was the plan. Sitting down, Cliff had just opened his Beano when a hand swooped in and grabbed it.

At eye level there was a label saying ‘Dorothy Roberts’, but the face above it belonged to that naughty girl, Esther Jenkins. Her hair was in two dark brown plaits, the pointed ends of which looked like they’d been sucked. She was holding Cliff’s comic high above her head. It annoyed me that she’d taken it without asking.

“That’s not yours!” I said, reaching for it.

I tried to make a lunge for the comic, but she was taller than me.

“I bought that for the journey,” Cliff protested.

Before we could do anything, the comic got passed on to a boy, then another boy, before disappearing down the carriage.

Esther patted Cliff on the head – “Thanks, pal” – before going back to her seat. Cliff’s bottom lip started to quiver.

“Shut up Olive! Leave me alone!” He turned away, burying his face in his arms. I didn’t know what to do. There were no teachers on board to tell, though through the window I saw that same old one out on the platform, arguing with a guard. Sukie, I knew, wouldn’t stand here feeling useless. Even worse, Cliff had started sobbing. I’d promised to look after him and was doing a lousy job of it.

“Stay there,” I told Cliff.

Heading down the carriage, I soon found the Beano. Two girls were poring over a Dennis the Menace cartoon on the centre pages.

“Umm …. excuse me,” I said politely, stopping at their seats.

The girls kept their heads down.

I tried again. “I don’t know if you realise but that belongs to use. You can borrow it if you want, when my brother’s finished reading it.”

They ignored me. I felt rather stupid. Especially when the boys in the next row started laughing and jeering, egging people on to join in until it spread through the whole carriage.

Thoroughly flustered and wanting the whole thing to just be over, I tried to grab the comic again.

Can you pick 10 key events that have happened in this part of the text?

Order them and add more detail to explain what is happening.

Standing in the doorway was a teacher, the one who’d been arguing on the platform. Now, it seemed, was our turn.

“Carson! Mitchell! Don’t you know your alphabet?” He barked.

The girls reading Cliff’s Beano jumped out of their skins. As the comic slithered to the floor, I snatched it.

“You’re supposed to be in coach F, not this one,” he yelled. “I’ve just spent the last ten minutes trying to sort out the confusion you’ve caused.”

“But Mr Barrowman, sir …” One of the girls tried to speak.

The teacher – our teacher, I realised dismally – cut her dead. “Each coach is for a different location, you foolish girls. This is coach D, going to Devon. You’re in coach F, which will be going to hell and back if you’re not careful. So move yourselves. You’re holding up the whole train.”

Mortified, the girls rose out of their seats and got their suitcases. The whole carriage watched without a word. I crept back up the aisle towards Cliff.

“You there! The girl in the checked coat!” Mr Barrowman barked.

I stopped. Turned round. “Me?” Which was a stupid thing to say since no one else was wearing a checked coat.

“Take these.” He clicked his fingers at where the girls had been sat. “Hurry up now.”

Cliff and me slid on to their still-warm seats. Reunited with his Beano, my brother soon cheered up. But right in my eyeline, just down the aisle, was the person who’d started it all.

“What you looking at?” Esther Jenkins mouthed.

“Dunno. Hasn’t got a label on it.” I muttered to myself, though like all of us she had one swinging from her coat. I just hoped she’d lose interest in me once we got moving.

Walking up the aisle, Mr Barrowman checked our names against his own shorter list, and made Esther and Dorothy swap their labels. The moment he took his seat at the front, Esther Jenkins started on me again: “You with the bruise on your forehead.”

I made a point of gazing out the window. She didn’t take the hint.

“You snitched on my friends,” she said. “They had to move carriages because of you. And now they won’t be billeted with us, so I’d say that’s your fault.”

It wasn’t my fault, I knew it wasn’t. I didn’t make them sit in the wrong part of the train. I didn’t snitch on them either, yet Esther Jenkins blamed me and I felt hot and miserable with the injustice of it.

Settling back in my seat, I consoled myself with two thoughts: Queenie, at least, would be kind and friendly and might know more than I did about where my sister was. Plus, I’d never seen a proper lighthouse before.

This week, I want you to imagine that you are Olive on that train journey – a lot has happened to you already! We are eventually going to write a letter to Mum.

Start by completing this lesson on letter writing:

Please watch the video on multiplying decimals and then complete the worksheet and challenge underneath.

What is the difference between a need and a want?

What do humans need?

What do humans want?

Have a look at Maslow’s hierarchy of human needs: 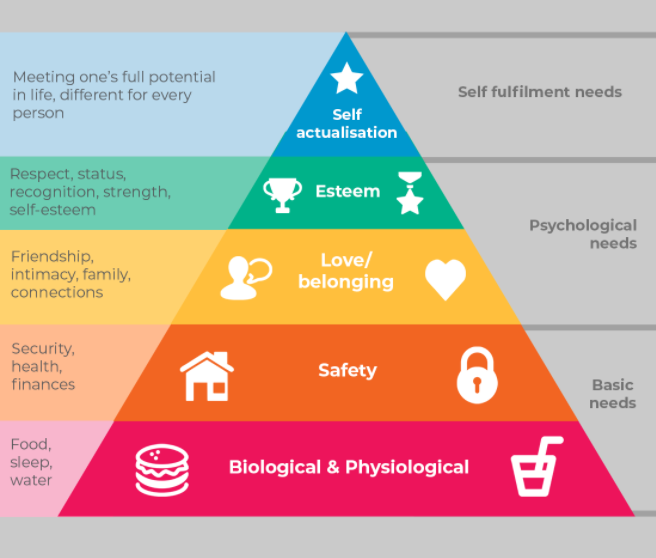 This diagram explains what Maslow believes that every human needs in order to live a fulfilled life.

Can you write an explanation for each section?