Good morning Year 6 and welcome to your last (hopefully) week on remote learning! This time next week we will all be together again!

We look forward to seeing you all on Zoom at 9:05am

Today, you may have found out which secondary school you are going to – please let us know which school and how you feel about it.

We will be having a drop-in session at 10am. If you would like to talk about your secondary school, please come along.

Start by having a look over today’s vocabulary:

Dismantled – take something to pieces.

Have a read of the next part of the text:

And so Tom found himself being sent off to do Gut-duty while all the other apprentices were busy celebrating the capture of Salthook. After a long, embarrassing lecture in Pomeroy’s office (“Disobedience, Natsworthy … Striking a senior Apprentice … What would your poor parents have thought?”) he trudged over to Tottenham Court Road station and waited for a down elevator.

When it came, it was crowded. The seats in the upper compartment were packed with arrogant-looking men and women from the Guild of Engineers, the most powerful of the four Great Guilds which ran London. They gave Tom the creeps, with their bald heads and those long white rubber coats they wore, so he stayed standing in the lower section, where the stern face of the Lord Mayor stared down at him from posters saying, Movement is Life – Help the Guild of Engineers keep London moving! Down and down went the elevator, stopping at all the familiar stations – Bakerloo, High Holborn, Low Holborn, Bethnal Green – and at every stop another crowd of people surged into car, squashing him against the back wall until it was almost a relief to reach the bottom and step out into the noise and bustle of the Gut.

The Gut was where London dismantled the towns it caught: a stinking sprawl of yards and factories between the Jaws and the central engine-rooms. Tom loathed it. It was always noisy, and it was staffed by workers from the lower tiers, who were dirty and frightening, and convicts from the Deep Gut Prisons, who were worse. The heat down there always gave him a headache and the sulphurous air made him sneeze and the flicker of the argon globes which lit the walkways hurt his eyes. But the Guild of Historians always made sure some of its staff were on hand when a town was being digested, and tonight he would have to join them and go about reminding the tough old foreman of the Gut that any books and antiques aboard the new catch were the rightful property of his Guild and that history was just as important as bricks and iron and coal.

He fought his way out of the elevator terminus and hurried towards the Guild of Historians’ warehouse, through tubular corridors lined with green ceramic tiles and across metal catwalks high above the fiery gulfs of the Digestion Yards. Far below him he could see Salthook being torn to pieces. It looked tiny now, dwarfed by the vastness of London. Big yellow dismantling machines were crawling around it on tracks and swinging above it on cranes and clambering over it on hydraulic spider-legs. Its wheels and axles had already been taken off, and work was starting on the chassis. Circular saws as big as Ferris wheels bit into the deck-plates, throwing up plumes of sparks. Great blasts of heat came billowing from furnaces and smelters, and before he had gone twenty paces Tom could feel the sweat starting to soak through the armpits of his black uniform tunic.

But when he finally reached the warehouse, things started to look a bit brighter. Salthook had not had a museum or a library, and the small heaps that had been salvaged from the town’s junk-shops were already being packed into crates for their journey up to Tier Two. If he was lucky he might be allowed to finish early and catch the end of the celebrations! He wondered which Guildsman was in charge tonight. If it was old Arkengarth or Dr Weymouth he was doomed – they always made you work your whole shift whether there was anything to do or not. If it was Potty Pewtertide or Miss Plym he might be all right …

Today, we are going to be completing a ‘thinking out loud’ activity of this text.

Watch the video below to remind yourself how.

Complete your own ‘Thinking out Loud’ about the whole text. Remember to take your time and really think about each part.

In today’s lesson, we are going to be recapping on what is meant by active and passive sentences.

What can you remember?

Here is an active sentence

The girl ran through the park with her running club.

Here is the same sentence but this time it is passive

The park was run through by the girl with her running club.

What do you notice?

Here are some definitions:

In an active sentence, the subject performs the action (the verb) to the object.

In a passive sentence, the thing that would normally be the object gets turned into the subject through the use of the passive form of the verb. They often include a prepositional phrase starting with ‘by’.

Now work through the information and the tasks on the PowerPoint below.

This week, we are back to some Rapid Reasoning questions. 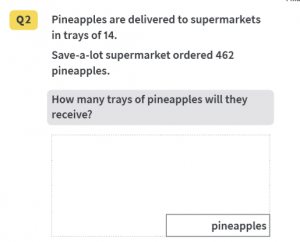 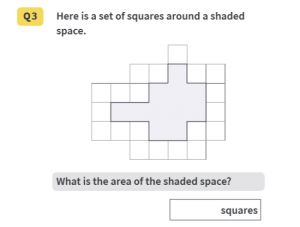 This week, we are going to recap on our number skills and our knowledge of number facts.

Today we will be looking at:

When we are squaring a number or trying to find the square of a number there is a little 2 above the number e.g.

When we are squaring a number, we simply need to multiply the number by itself.

Let’s have a look at another one:

Now you have a go by completing the grid below. 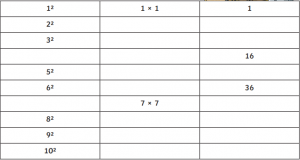 When we are cubing a number or trying to find the cube of a number, we use a little 3 above the number to show this i.e.

When we are cubing a number, we simply multiply the number by itself and then by itself again.

We can help ourselves further by putting brackets around the first calculation:

Then we solve the calculation remembering that we need to solve the brackets first:

Let’s have a look at another example:

Complete the table below:

Prime numbers are numbers that can only be divided by themselves and the number 1 without leaving a remainder. You could also view is as numbers that only appear in the 1 times table and in their own times tables.

7 can not be divided by anything apart from 1 and 7. If we divided it by anything else then it would leave a remainder.

Can you think of any other examples?

23 is another example. Does it appear in any times tables apart from 1 and 23?

Complete this Maths Mystery that is based on Prime numbers

Watch this video first for an explanation 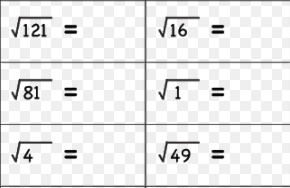 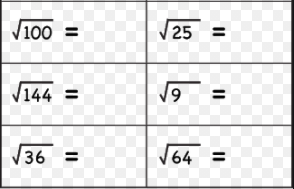 Spend the next 20 minutes reading a book of your own choice of catching up on chapters of The Explorer.

Complete the spelling mat all about the word achieve.

What is ‘Global trade’?

First, think back to last week. Can you write down 5 facts that you learnt about trade last week?

Now have a look at this week’s vocabulary:

Consumable – something that you can eat or drink​.

Consumer – a person who buys goods or services for their own use​. 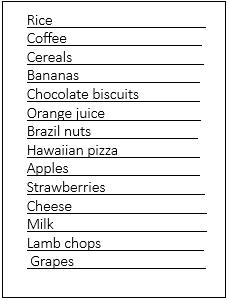 Using the internet, can you research the origin of these items? Where does the UK import them from? Do we make these items here?

Think carefully because some items may include more than one ingredient.

Look at this famous quote from Martin Luther King JR.

“Before you finish eating breakfast in the morning, you’ve depended on more than half of the world.”

Do you think this is true?

Does this surprise you? 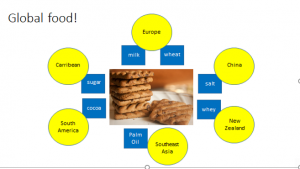 Is this surprising to you?

Why do you think we need the help of so many different countries?

Why can’t we grow it all here?

How do you think these items get to us?

UK will need to import over half of its food within a generation, farmers warn

More than half of the UK’s food will come from overseas within a generation, as a rising population and stalling farm productivity combine to erode what remains of the UK’s self-sufficiency, according to farming leaders.

The UK’s failure to produce more food will leave households more vulnerable to volatile prices and potential shortages, the National Farmers’ Union will say at its annual conference on Tuesday. The farming body will call on politicians to encourage new investment in farming, and develop a national plan for a higher degree of food self-sufficiency.

Meurig Raymond, president of the NFU, warned: “The stark choice for the next government is whether to trust the nation’s food security to volatile world markets or to back British farming and reverse the worrying trend in food production. I want to see a robust plan for increasing the productive potential of farming, stimulating investment and ensuring that the drive to increase British food production is at the heart of every government department.”

The NFU cited “poorly crafted regulation”, including EU and UK policies that have “over-emphasised environmental rather than production outcomes and complicated the business of farming”, and farmers having weak bargaining power with big retailers as key problems affecting agriculture.

Farming production is worth about £26bn a year, while the broader food industry accounts for about £103bn to the UK economy, more than the car and aerospace industries combined, and represents about 3.5m jobs.

According to projections by the NFU, on current trends the UK will reach a tipping point in about 25 years, beyond which a majority of our food will have to be imported, unless governments take strong action to improve food production and protect consumers from a future of relying on food bought from abroad.

Self-sufficiency in food in the UK has been eroded since the 1980s: about 60% of food currently consumed here is grown here, down from nearly 80% in the mid 1980s, even though more varieties of food previously thought of as exotic are now grown in the UK.

The problems created for British farmers when cheap imports flood the UK’s market have been illustrated in recent weeks. A glut of dairy products on international markets has sent prices to farmers plummeting, driving thousands out of business and threatening a future in which the UK has to import its fresh milk. The Department for Environment, Food and Rural Affairs said the government was creating opportunities for farmers. “We are helping the industry become more competitive, at home and abroad, by opening up record numbers of international food markets to export our produce, making it easier for our schools and hospitals to buy local, helping consumers to choose UK products through improved country-of-origin labelling, and investing in cutting-edge technology such as GPS-guided tractors.”

Taken from an article written in the Guardian newspaper

Write an explanation that explains the following:

Why is global trade necessary?

Do you think global trade could cause conflict between countries? Why?

Make sure you take part in the last remote learning competition!

Enjoy the next chapter of The Explorer

See you in the morning.