We look forward to seeing you all on Zoom at 9:05am.

Why not challenge yourself by seeing how many you can get correct in 15 minutes?

Have another read of the text from yesterday:

It was a dark, blustery afternoon in spring, and the city of London was chasing a small mining town across the dried-out bed of the North Sea.

In happier times, London would never have bothered with such feeble prey. The great Traction City had once spent its days hunting far bigger towns than this, ranging north as far as the edges of the Ice Waste and south to the shores of the Mediterranean. But lately prey of any kind had started to grow scarce, and some of the larger cities had begun to look hungrily at London. For ten years now it had been hiding from them, skulking in a damp, mountainous, western district which the Guild of Historians said had once been the island of Britain. For ten years it had eaten nothing but tiny farming towns and static settlements in those wet hills. Now, at last, the Lord Mayor had decided that the time was right to take his city back over the land-bridge into the Great Hunting Ground.

It was barely halfway across when the look-outs on the high watch-towers spied the mining town, gnawing at the salt-flats twenty miles ahead. To the people of London it seemed like a sign from the gods, and even the Lord Mayor (who didn’t believe in gods or signs) thought it was a good beginning to the journey east, and issued the order to give chase.

The mining town saw the danger and turned tail, but already the huge caterpillar tracks under London were starting to roll faster and faster. Soon the city was lumbering in hot pursuit, a moving mountain of metal which rose in seven tiers like the layers of a wedding cake, the lower levels wreathed in engine-smoke, the villas of the rich gleaming white on the higher decks, and above it all the cross on top of St Paul’s Cathedral glinting gold, two thousand feet above the ruined earth.

Start by having a look at the following vocabulary:

Auxiliary – equipped with an extra engine.

Gyrating – move rapidly in a circle.

Guild – a group of people.

Meekly – in a quiet and gentle mannar.

Now read through the next part of the text:

Tom was cleaning the exhibits in the London Museum’s Natural History section when it started. He felt the tell-tale tremor in the metal floor, and looked up to find the model whales and dolphins that hung from the gallery roof swinging on their cables with soft creaking sounds.

He wasn’t alarmed. He had lived in London for all of his fifteen years, and he was used to its movements. He knew that the city was changing course and putting on speed. A prickle of excitement ran through him, the ancient thrill of the hunt that all Londoners shared. There must be prey in sight! Dropping his brushes and dusters he pressed his hand to the wall, sensing the vibrations that came rippling up from the huge engine-rooms down in the Gut. Yes, there it was – the deep throb of the auxiliary motors cutting in, boom, boom, boom, like a big drum beating inside his bones.

The door at the far end of the galley slammed open and Chudleigh Pomeroy came storming in, his toupee askew and his round face red with indignation.

“What in the name of Quirke …?” he blustered, gawping at the gyrating whales, and the stuffed birds jigging and twitching in their cases as if they were shaking off their long captivity and getting ready to take wing again. “Apprentice Natsworthy! What’s going on here?”

“It’s a chase, sir,” said Tom, wondering how the Deputy Head of the Guild of Historians had managed to live aboard London for so long and still not recognise its heartbeat. “It must be a good thing,” he explained. “They’ve brought all the auxiliaries on line. That hasn’t happened for ages. Maybe London’s luck has turned!”

“Pah!” snorted Pomeroy, wincing as the glass in the display cases started to whine and shiver in sympathy with the beat of the engines. Above his head the biggest of the models – a thing called a blue whale that had become extinct thousands of years ago – was jerking back and forth on its hawsers like a plank-swing. “That’s as may be, Natsworthy,” he said. “I just wish the Guild of Engineers would fit some decent shock-absorbers in this building. Some of these specimens are very delicate. It won’t do. It won’t do at all.” He tugged a spotted handkerchief out of the folds of his long black robes and dabbed his face with it.

“Please, sir,” asked Tom, “could I run down to the observation platforms and watch the chase, just for half an hour? It’s been years since there was a really good one …”

Pomeroy looked shocked. “Certainly not, Apprentice! Look at all the dust that this wretched chase is shaking down! All the exhibits will have to be cleaned again and checked for damage.”

He knew at once that he had made a mistake. Old Chudleigh Pomeroy wasn’t bad as Guildsmen went, but he didn’t like being answered back by a mere Third Class Apprentice. He drew himself up to his full height (which was only slightly more than his full width) and frowned so sternly that his Guild-mark almost vanished between his bushy eyebrows. “Life isn’t fair, Natsworthy,” he boomed. “Any more cheek from you and you’ll be on Gut-duty as soon as this chase is over!”

Of all the horrible chores a Third Class Apprentice had to perform, Gut-duty was the one Tom hated the most. He quickly shut up, staring meekly down at the beautifully buffed toes of the Chief Curator’s boots.

What impression do you get of Tom? Why?

What impression do you get of Chudleigh Pomeroy? Why?

The thing that stuck out to me in this text was the part where it talked about a blue whale becoming extinct.

The blue whale is currently on the endangered list but isn’t extinct.

Read the information at the link below to learn more about the blue whale:

What does this part of the text suggest about the story?

Write a explanation and description of what you think life might have been like for the people of London at this time.

Here are today’s five in five questions (although today there are 6!):

Today we are going to recap on how to multiply whole numbers and decimals. We will also look at long multiplication again.

Start by watching the video where I will remind you how to do this using the column method.

Begin by watching this video where I will recap the steps that you need to take.

Remember that long multiplication is when we multiply a number by 2 digits or more e.g.

Watch this video to see a reminder of how to do this.

Here are some sentences. The circled words are spelt incorrectly – can you correct them?

This half term, we will be learning all about Sikhism.

What do you know about Sikhism?

Why is community important? How did the Sikh community begin?

What do you know about the word community?

What does the word community mean?

Community – a group of people who worked together for a common goal or interest. Lings Primary School is an example of a community because we all worked together.

What different communities can you think of?

Why do you think communities are important?

Which communities are you a part of?

Take one example – how does it make you feel being part of that community?

Emblem – an image to represent a concept of identity.

Sikh – someone who follows the religion of Sikhism.

Khanda – an emblem of the Sikh community.

Nishan Sahib – the Sikh flag (Nishan means flag and sahib is a term of respect). 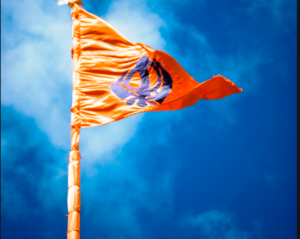 Read the following text which explains how Sikhism began:

Even as a child there was something different about Nanak. Strange, mysterious things seemed to happen all around him. One day he fell asleep in the shadows under a tree. This could be quite dangerous in a hot country like India. If he didn’t wake up, the sun would burn him as it moved round but a strange thing happened. As the sun moved round, all the shadows under the trees also moved round, except the shadow protecting Nanak which stayed exactly where it was.

Strange things like that kept on happening, even when Nanak became a man. Nanak used to get up before dawn and go to the river to bathe and say his prayers but one morning he disappeared. All that remained were his clothes lying on the bank. All the people in the village looked everywhere for him and when they couldn’t find him they thought that he had drowned. However, three days later, Nanak suddenly reappeared! Everyone wanted to know where he had been. He said that he had been with God and that he had been told to go and teach the people about how they too could get closer to God.

Nanak’s vision changed his life and from then on, he travelled the world teaching God’s message. The followers who gathered to listen to him became known as Sikhs, a word meaning learner, and he became known as Guru Nanak meaning God’s teacher.

Watch the video and read the information at the link below to learn more:

Have a look below at Guru Nanak’s teaching:

Sikhs believe that religions are different pathways that lead to the same God and so anyone who wants to worship can join in. Guru Nanak was born a Hindu and his desire to bring together Hindus and Muslims led to his seeking a new religion.

Are there any similarities between the teachings of Guru Nanak and other religions that we have looked at?

Now let’s look at the Khanda – an important emblem of the Sikh community. 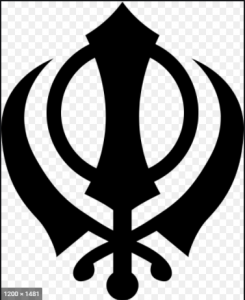 Watch this clip to learn more about the Khanda.

Let’s go through each part of the Khanda.

At the centre is a double edged sword

This symbolises that Sikhs believe in one God.

Across the sword is a circle called the Chakkar.

This is like the Kara which is a steel band that Sikhs wear.

This represents strength, spirituality and power.

Write an explanation about what you have learnt today.

Make sure you include the following in your explanation:

This half term, we will be looking at celebrating our differences.

What is similar about all of us?

What is different about all of us?

Finish this sentence with your definition of normal:

The definition of normal is:

To me, what is normal to one person might not be normal to another and therefore everyone is normal.

It is perfectly normal and typical of me to go home and feed my pet turtles; for others, turtle would seem like an strange pet to have and wouldn’t be considered normal.

Have a look at your definition of normal – are there any changes you would like to make?

Over the next week’s we are going to look at different people that have a different normal to others.

This week, we will be learning about Theo’s normal.

Watch Theo’s story at the link below:

Make sure you log in and take part in this week’s competition.

Well done Year 6 for all your hard work. We hope you have a lovely evening and we look forward to eeing you in the morning.