Wow Finlay.  Great work.  I love the way you’ve thought about how the characters are feeling.

Oberon the ruler of the fairies is furious and hatches a plan to get revenge on Titania.

While speaking to his trusty friend Puck Oberon tells him “You shall find me a magical flower where that will make the people want to fall in love with the person, they first lay eyes on when they wake up!”

After thinking “I shall go and find this now” replies Puck, smirking and laughing as he knows he can cause mischief.

Puck Finds the flower and flies of returning back to Oberon with the magic flower, Oberon takes the flower off puck and puts the juice on Titania’s eyes as she sleeps. “We need to find Demetrius Immediately.” Oberon orders Puck.
Puck flies of and begins his search for the Demetrius flying high and low through the trees and bushes in forest, all of a sudden, he comes across a figure asleep on the ground.

“This must be Demetrius sleeping on the forest floor ?” he says to himself.

But he is mistaken it is Lysander and he puts the juice onto Lysander and Leaves in a hurry making his way through the forest quickly back to Oberon to tell him that the task had been completed.

At this moment Helena and Demetrius appear, walking past the trees in the forest, searching for Lysander and Hermia. Lysander is still lying asleep on the floor when Helena finds him and tries to wake him up . Lysander wakes and the first thing he sees when he opens his eyes is Helena, he instantly falls in love with her.

In a different part of the forest Hermia is beginning to wake up, looking very confused and wondering where is Lysander. She sits with her thoughts for a while but she is very confused and cannot figure anything out as she is under the magic of the flower.

Here is Ben’s next section of the story.  He’s used a good range of punctuation and some nice details.

Here is Cody’s next section of the story, with some great details about the characters thoughts and feelings.

Oberon wants to get revenge on Titania due to the changeling boy.

He calls Puck over and says “Go and find me a magical flower where the juice on the eyes will make people fall in love with whatever or whoever they see when they wake up!”

“Also Puck, when you see that man from Athens, Demetrius, put the juice on his eyes too.” Oberon says as Puck flies away.
Once Puck comes back with the magic flower, Oberon drops the juice on Titania’s eyes as she peacefully sleeps.

“Now go and find Demetrius.” Oberon tells Puck.
As Puck flies through the dark, quiet forest, he sees Lysander asleep on the ground

It must be! He pours the juice onto Lysader’s eyes and flies away back to Oberon, hoping he’s done the right thing.
Helena and Demetrius then come through the trees looking for Lysander and Hermia. Helena sees Lysander lying on the floor and thinks he is hurt, so she wakes him. When Lysander opens his eyes, he sees Helena and completely falls in love with her. Helena is very confused so walks away and Lysander follows her. Hermia then wakes up and looks around for Lysander, looking confused and scratching her head. She asks herself, where could he be?

Cameron has written the next section of his “Dream” story,  with speech and some great vocab choices.

Hargun has done some research on Captain Sir Tom Moore

Mia’s description of the woods got a bit lost in the blog forest,  so I’ve only just seen it.  But it’s beautiful so I had to share it.  And she remember new speaker new line!

A mile from the city was a dark and spooky forest where magical things happened. The trees were swaying and the squirrels were chattering as the leaves where rustling. Voices can be heard whispering within the trees. Oberon and Titania could be seen under the moonlight arguing. Puck and the fairy over hear the argument and move in closer to see what was happening.
“I do but beg a little changeling boy to be my henchmen.” Said Oberon.
“Not for thy fairy kingdom” Said Titania in reply as she left the woods.

Speech about the end of the war:
I declare the war to end right now! Too many people have died during this war, we need peace and harmony in the world. The trenches are too cold, too dark and muddy for anyone to live in. The diseases from rats and the living conditions are awful. Our soldiers need help, company and medicine from us all. Please pay respect to all our men. 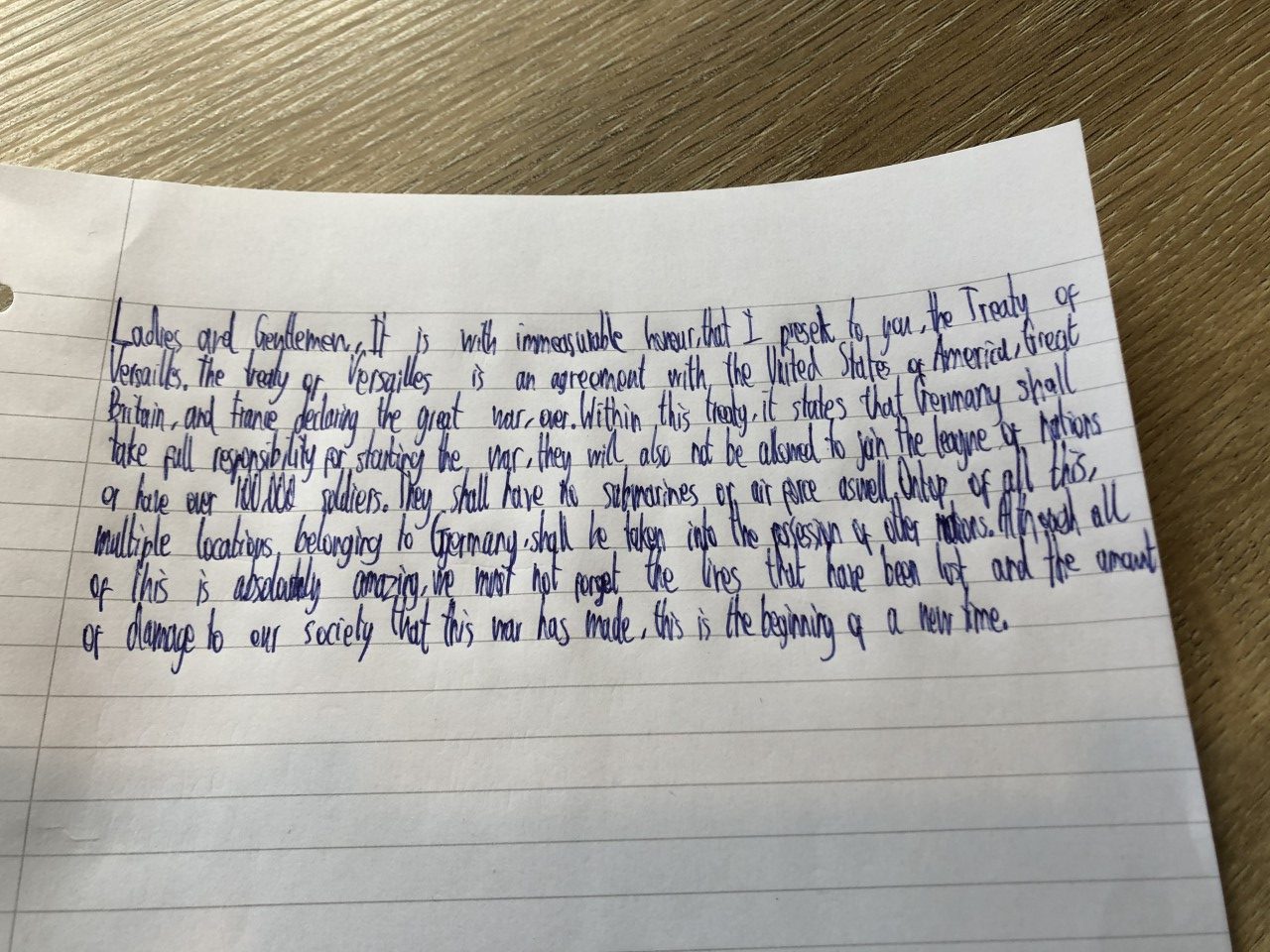 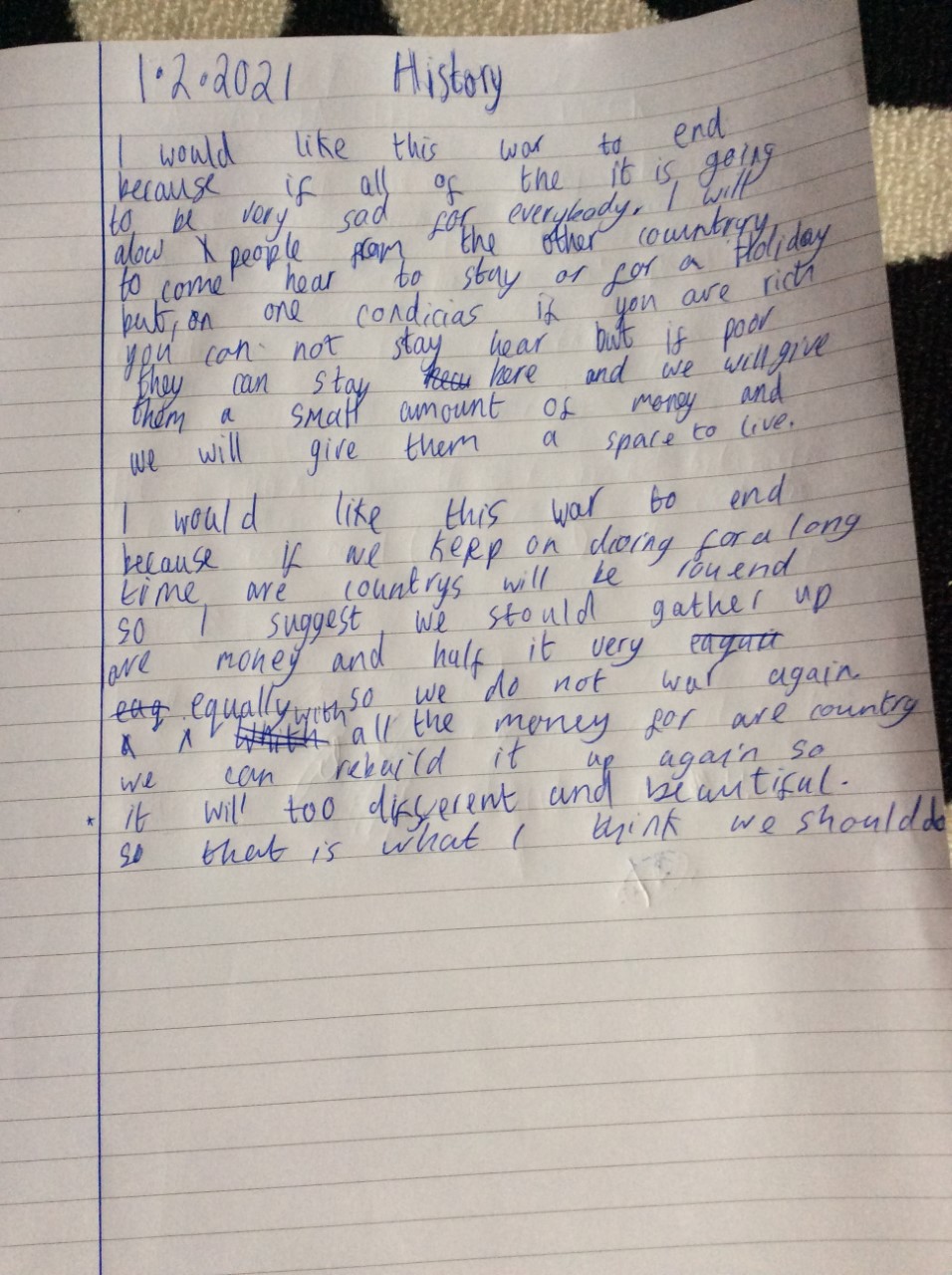 The Trenches and Treaty