Don’t forget that there is a Zoom session to introduce this lesson at 11 o’clock.

The lesson is about Hermia and Lysander, and what they plan to do in reaction to what Egeus has said.

In case you’ve forgotten, Egeus is concerned that Demetrious has his permission to marry Hermia but that she is in love with Lysander. Egeus has referred to the law of Athens which says that she either marries the person who he chooses or he disposes of her – through either her death or a life without any other man. Duke Theseus then tells Hermia that her father should be respected like a God and that she should listen to him.

When they find themselves alone, Hermia and Lysander talk about what they should do. Their conversation is shown below. 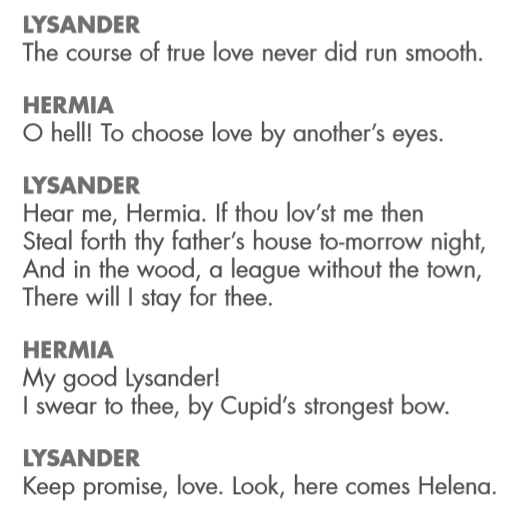 A reminder of a couple of words: league – a large collection or group of people. Cupid – the ancient Roman God of love.

Your first written task is to answer these questions about the text.

You should then think and write about the following question:

Should Hermia stay in Athens or run away with Lysander to the forest? (you should write at least 100 words for this).

– Think of and write reasons for both sides of the argument.

– What would you advise Hermia to do and why?